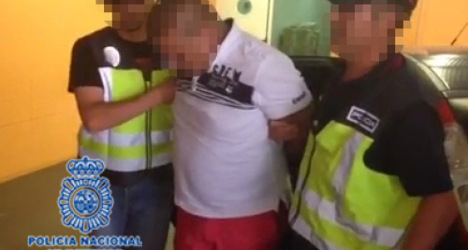 Hernán Alonso Villa, also known as El Ratón, was arrested on a highway in Spain's Alicante province with €40,000 ($54,000) in cash in his possession, police said in a statement.

Villa is the head of the military wing of the Colombian crime syndicate Oficina de Envigado, which has its origins in the feared Medellín Cartel, founded by Pablo Escobar and others in the 1970s.

With 200 people under his command, the crime boss allegedly organized shipments of cocaine bound for Spain, the US and Holland.

His group are also believed to be responsible for up to 400 murders.

El Ratón is being held on drug smuggling, extortion and people trafficking charges and now faces extradition to Colombia.

Villa's arrest came after a month-long search by Spanish and Colombian police, with the crime lord constantly moving house and using an array of false identities in a bid to avoid capture.