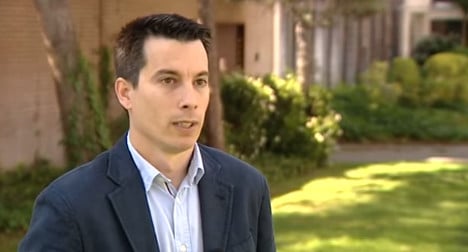 Segura is the author of a bestseller in Spain which offers an insider’s view of alleged financial and ethical malpractices by top officials in the Spanish army. Photo:YouTube

Luis Gonzalo Segura de Oro-Pulido has been on hunger strike since July 17th, a day before he was put in a military prison for breaching the code of conduct of Spain’s military.

The 34-year-old lieutenant is the author of Un paso adelante (A step forward), a bestseller in Spain which offers an insider’s view of alleged financial and ethical malpractices by top officials in the Spanish army.

Hoping his book would lift the lid on the “fraud”, “work-related abuse” and “pseudo-mafioso crimes” he claims to have witnessed, Segura has in fact been the only ‘army man’ so far to have to account for his actions.

An inquiry has been opened against him, with his possible dismissal from the Armed Forces on the cards, and he will have to spend the next two months under army arrest for “disrespecting military authorities” and “speaking out against discipline in a media context”.

“In one of the reports I presented before the judge I told him I had a hard drive with information. But he just closed the case without even asking me for it,” Segura told El País prior to being imprisoned.

The lieutenant turned whistle-blower was rushed to a Madrid hospital on Saturday after a three-day hunger strike, a move he hopes will raise awareness for his “unfair” imprisonment.

Spain’s edition of the Huffington Post approached members of the military, all of whom “vouched” for what is written in Segura’s novel.

He describes Spain’s army as a feudal system where top officials live a life of opulence, spending the €9 billion state budget they receive on whatever they want rather than allocating it evenly through the forces.