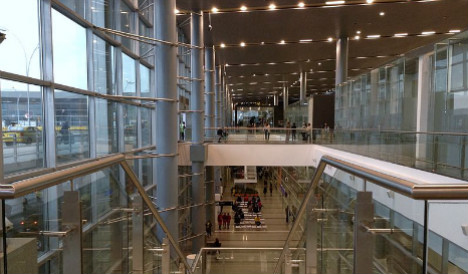 The couple, who were headed to Madrid, admitted to paying the infant's parents more than $24,000 for the baby, and a doctor middleman another $1,600, immigration authorities said in a statement.

The pair reportedly contacted the mother via a website, an immigration authority told AFP, adding that she and the doctor were from the western city of Armenia.

The couple faces charges of trafficking of a minor, the statement said.

The baby, who was dehydrated and taken to a hospital for treatment, was placed with the Colombian Family Welfare Institute, the spokesman said.

In 2013, Colombian immigration authorities prevented 48 minors from being trafficked out of the country under false documentation. So far in 2014, there have been 36 such cases, the spokesman said.