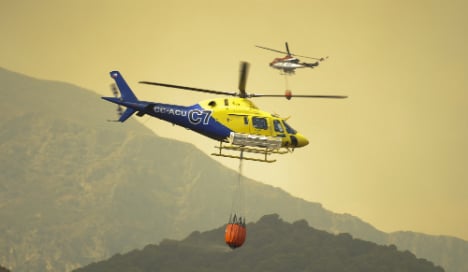 More than 100 firefighters backed by planes and helicopters battled a blaze in scrubland near the town of Bustares in the central province of Guadalajara, east of Madrid, the regional government said.

The blaze, which was accidentally started by a beekeeper, forced the evacuation of 140 people from two villages, it added.

The wildfire has destroyed around 200 hectares of land, including part of the Sierra Norte national park.

More firefighters aided by water-dropping aircraft fought another blaze raging near the town of Cogolludo, also in Guadalajara province.

This fire, accidentally sparked on Wednesday by a combine harvester, saw 40 people evacuated from two villages.

The blaze has so far destroyed over 800 hectares of scrubland and pine forest.