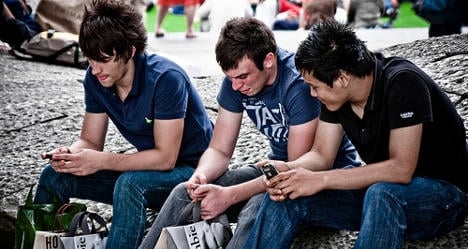 “We’re bringing up a generation of cowards who only say “I love you” or “thanks” on Whatsapp because it’s more ‘convenient’." Photo: Garry Knight/Flickr

If you think eight hours staring at a screen while at work is enough already, you may struggle to fathom how many Spaniards and other Europeans do the very same thing in their free time.

The startling results are based on 5,000 interviews with 18 to 65-year-olds across Europe carried out by Samsung and market research company Ipsos MORI.

“There haven’t been any sociodemographic studies on the matter so I can’t accurately say why Spaniards are more addicted to screens than other nationalities.

“What I do know is that mobile phones are the main ‘culprits’; we carry them with us at all times and they’ve replaced our reality with a virtual existence.”

Through his therapy practice Desconecta (Disconnect in Spanish), Madip teaches his patients, mainly youngsters, how to get over their nomophobia: the irrational fear of being without mobile phone contact that 77 percent of users suffer.

“We’re bringing up a generation of cowards who only say “I love you” or “thanks” on Whatsapp because it’s more ‘convenient’.

“They’ll end up not having the social skills to tackle a job interview or ask their girlfriends to marry them.”

Ironically, Madip is also the co-creator of a phone app called FaceUp, which collects data on your phone and internet usage and sets challenges to stop you from reaching out for your mobile all the time.