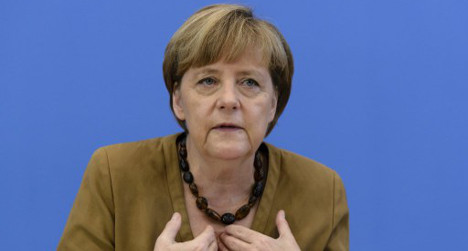 German Chancellor Angela Merkel on Friday held up the example of the German federal model as one Spain could emulate. Photo: Clemens Bilan/AFP

"We (the German government) defend the territorial integrity of all of (European Union) member states, which is something completely different from the independence of a region," said Merkel in response to a question about a planned November 9th vote on the issue of independence in the Spanish region of Catalonia.

Spain's national parliament in April ruled the non-binding poll is illegal because all Spaniards have the right to vote on the secession of a particular region.

But Catalan leaders have vowed to go ahead with the poll regardless.

Merkel on Friday said she didn't want to get involved in what was a internal political discussion in Spain, Spain's El Mundo newspaper reported.

But speaking during a traditional summer press conference, the Chancellor did hold up the example of the German federal system as one Spain might want to emulate.

Germany has sixteen federal states of Laender with local authorities possessing "a lot of room" to act and a high degree of autonomy, Merkel said.

The comments from the Chancellor — who turned 60 on Thursday — reflect the recently stated position of the president-elect of the European Comission, Jean-Claude Juncker, who also said the Catalonia issue was one that Spain would have to solve itself.

EU leaders have also previously said that an independent Catalonia would automatically leave the EU, and would have to reapply to become a member state.

Proud of their distinct language and culture and fed up after five years of stop-start recession, many of the 7.5 million people in Catalonia want to leave Spain, saying they feel short-changed by the central government which redistributes their taxes, and which ignores their separate identity.

But people in Catalonia face stiff opposition from political and social forces within Spain.

On Wednesday, a group of 50 high-profile writers and intellectuals have published a manifesto urging the country's prime minister not to risk the "destruction of Spanish democracy" by negotiating on the issue of an independent Catalonia.

That call came after recent suggestions that Spanish Prime Minister  Mariano Rajoy might be willing to sit down to talks with Catalan President Artur Mas to try and break the deadlock over the November 9th poll.