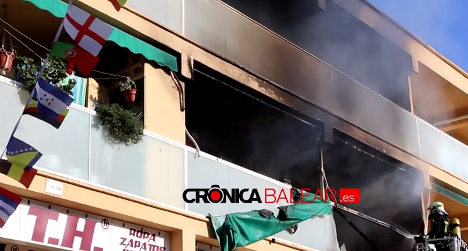 One family trapped on the fourth floor of the building in Magaluf threw their three-year-old down to a man below. Photo: YouTube/Cronica Balear
Twenty people had to be evacuated as the blaze spread through the building after the fire broke out at 8am on Wednesday, with one 61-year-old resident requiring medical attention after breathing in toxic fumes.
According to local daily El Diario de Mallorca, one family trapped on the fourth floor threw their three-year-old down to a man below who fractured his arm when catching the child.
“I heard a lot of commotion but as it’s so common here I didn't pay that much attention to it," said one resident.
"Then I saw smoke coming in through the door and I looked through the keyhole, and I saw fire and I had to escape."
Firefighters took several hours to control the blaze, and authorities are now investigating the incident.
Magaluf has been in the headlines recently after a video of a foreign tourist performing multiple sex acts in a local bar went viral.
The story was met with widespread indignation in Majorca, with the Balearic government appealing to Spain’s national administration and the local authorities in Magaluf to form a common front against what is being described in the media as ‘mamading’, from the Spanish word 'mamada', which means fellatio.
Island authorities are also hoping to clamp down on the drunk and disorderly behaviour of Magaluf holiday revellers by minimizing numbers on the notorious alcohol-fuelled bar crawls.