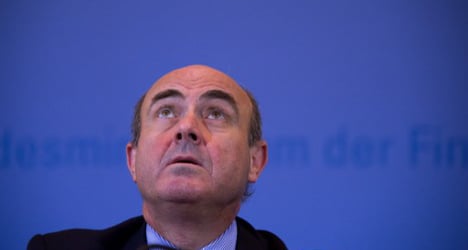 Spain's economy minister Luis De Guindos is widely tipped to become the new head of the Eurogroup, but won't know if this is the case for at least six weeks. File photo: AFP

De Guindos is widely tipped to become the new head of the Eurogroup, which has political control over the Euro currency and the EU's monetary union, with Spain's El País reporting he has the key backing of the Germans.

But Spain's economy minister will have to wait until at least the end of August to find out if he has landed the plum role after the European Council failed to come to an agreement on key positions during a meeting in Brussels on Wednesday.

The summit comes in the wake of the election of the conservative former Prime Minister of Luxembourg Jean-Claude Juncker as the next president of the European Commission.

Wednesday's failure to reach decision on the top posts in the new commission also means Italy's Foreign Minister Federica Mogherini will have to wait until the summer is over to find out if she is to become EU foreign policy chief.