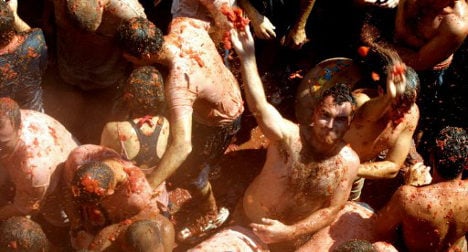 La Tomatina has attracted so much global attention that numerous cities in South America and Asia have copied the food-throwing festival idea. Photo: Jose Jordan/AFP

Held in the small Valencian town of Buñol every August, the tomato-throwing fiesta has attracted an overwhelming number of participants from around the world in recent years (up to 45,000), spurring the town hall to limit numbers last year and hand over responsibility to a private company through a concession.

In the face of a €4.1 million debt, Buñol authorities also decided to start charging revellers for a festival which had seen countless kilos of tomatoes smashed against the ground since the 1950s just at the town hall's expense.

This year Spaintastic, as the Spain-based tour operator now in charge is called,  claims to have sold 5,200 tickets at  €10 a piece and distributed 9,800 more to 20 tourism operators who then sell them as part of holiday packages to the event.

What has angered Buñol’s opposition right-wing Popular Party (PP) is that Spaintastic hasn’t disclosed how much they’re making from selling Tomatina tickets to third parties.

The PP claim it could be a juicy €2 million in profits, a figure local festival councillor Rafael Pérez has staunchly denied.

“They know their complaint will get nowhere, but they timed it so that it would coincide with the weeks before the Tomatina,” Pérez told Spanish news agency Efe.

“(Spaintastic’s contract) is not worth more than €7,000, and during the first year they made a loss.”

The issue has nonetheless been presented before Spain’s Anticorruption Attorney, with accusations of “lack of transparency, administrative paperwork and legal oversight” also flying through the air.

Spaintastic refused to comment on the matter when contacted by The Local.

Think the Tomatina is crazy? Check out these other insane Spanish festivals