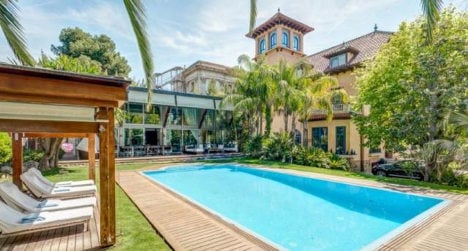 The 2,500 sqm property has been described as “an architectural jewel from the 1920s”. Photo: Idealista

Fifty-seven-year-old Mestre was once the toast of the town, his company Tercat managing two container terminals at Barcelona’s busy port.

Such was his prestige and reputation that Catalonia’s Generalitat government named him “businessman of the year”.

In June 2010, just months after receiving the accolade, Mestre was arrested after Catalan police found 186 kilograms camouflaged in one of his scrap metal containers, Spanish national daily El País reported.

Police surveillance found Mestre had been holding talks with an international drug ring for several months.

Four years on, Spain’s High Court found him guilty of drug trafficking, sentencing him to 12 years in prison and slapping him with a €14.6 million ($19.76 million) fine.

As the business tycoon turned drug villain is not yet behind bars, he’s taken the time to try to sell off one of his most prized possessions: a 2,500sqm (27,000 square feet) property described as “an architectural jewel from the 1920s”.

The money raised via the sale will be used to pay off Mestre's financial obligations, including mortgages he holds with banks.

Spain’s biggest home sale and rental website Idealista has posted an ad for the opulent property, located in Barcelona’s Pedralbes neighbourhood, where Spain’s scandal-hit princess Cristina and her husband Iñaki Urdangarín once lived.

The €30 million mansion is split into two buildings, which have a wine cellar, gym, garage with space for 12 vehicles, pool, nine bedrooms, seven bathrooms and even a watchtower.

As words do not suffice to accurately describe the lavishness and sheer variety of style Mestre’s mansion offers, The Local has put together a slide show for you to decide whether or not its worth taking out the longest mortgage in history.