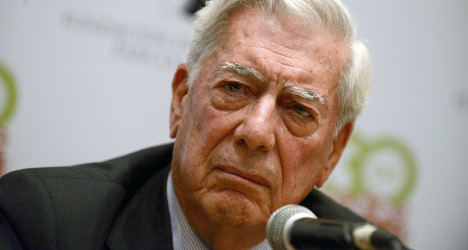 Mario Vargas Llosa is one of the key figures who have signed the Free and Equal manifesto. File photo: Federico Parra/AFP

"Until now the secessionist threat hasn't received the attention it deserves," the group says in its manifesto, published on Tuesday.

"The drive for Catalan independence is related to anti-European populism and will pave the way for the destruction of Spanish democracy. Avoiding this is everyone's responsibility, and it's the number one priority of political parties," they add.

Catalan leaders are pushing for a November 9th referendum on the issue of independence for the region with 7.5 million people.  Many in Catalonia feel they would be better off without Spain, saying they feel short-changed by the central government which redistributes their taxes.

Spain's national parliament ruled in April that such a poll would be unconstitutional but Catalan leaders have vowed to push ahead.

Recently, regional leader Artur Mas and Spanish PM Mariano Rajoy held a brief telephone conversation in which they agreed to meet, with some commentators saying the Catalan leader may be willing to give some ground.

But the figures behind the new 'Libres e Iguales' (Free and Equal) manifesto say that there is no room for "any negotiation" on independence "which limits the sovereignty of all Spanish citizens".

The group, which includes everyone from theatre directors to neuroscientists want an open debate on the issue of Catalan independence and have urged the government to "apply the full force of the law" if Catalan leaders go ahead with the vote on whether to split from the rest of Spain.

The group have set up a manifesto website where people can add their signature to the document. However, this option was temporarily disabled on Wednesday because of "the amount of spam received," according to site administrators.