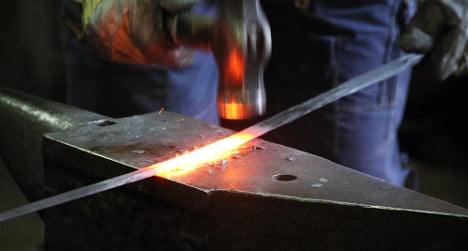 Sword making is as iconic to the “imperial” Spanish city of Toledo as its Muslim, Jewish and Christian heritage. Photo of Toledo sword maker: Shutterstock

Sword making is as iconic to the “imperial” Spanish city of Toledo as its Muslim, Jewish and Christian heritage.

For centuries, swordsmiths have used Toledo steel, famed for being extraordinarily hard, to arm both warriors and inadvertently land tourists in trouble at airport security.

But despite being Spain’s metal weaponry city par excellence, the country’s defence ministry has ditched local company Espadas y Sables de Toledo for one in China offering 1,708 sabres for €5 cheaper every unit.

According to online Spanish daily Te Interesa, owners of the sword making business have had to lay off five workers since they lost the order.

The company that imported the sabres, meant for soldiers of a high-grade military academy, is actually a tailoring and sewing business.

One of Spain’s biggest trade unions, CCOO, has criticized Spain’s defense department for turning their backs on Spanish workers and a reputable national product for the sake of saving just over €5,000.