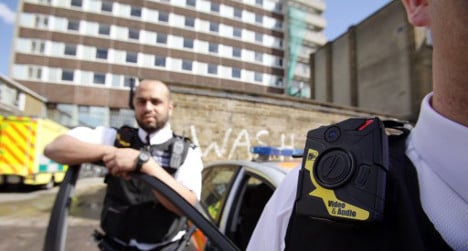 The shoulder cameras, already used by London police, constantly record 30-second video and audio even if the officer hasn’t switched the device on. Photo: Yui Mok/AFP

The filming devices will be attached to the officers’ shoulders, discreetly filming up to 12 hours of footage in real time.

The aim is for the live feed of dangerous protests to be sent via Wi-Fi to police headquarters in a bid to keep a record of violent protests and other potentially troublesome events.

Madrid became the protest capital of Europe in 2013 with a whopping 1,628 in just the first four months of the year.

There was even a proposal made to start using drones to keep an eye on mass gatherings in the city centre, Spanish national daily El País reported on Monday.

The shoulder cameras, already used by London police, constantly record 30-second video and audio even if the officer hasn’t switched the device on.

“It’s an interesting feature especially if a policeman is attacked before he has time to switch it on,” police sources told El País.

On the other hand, the candid cameras will also be able to catch any wrongdoing by the police officers themselves.

The cameras will be used for a year to trial how well they work.

Police in Madrid, Barcelona and other parts of Spain have already been slammed by human rights groups such as Amnesty International for their “excessive use of force”.