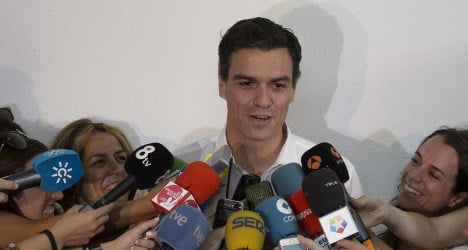 Pedro Sánchez , the new head of Spain's socialist PSOE party, believes a left-turn by the party could bring it back to election-winning form. Photo: AFP

Pedro Sánchez, who was elected on Sunday as the new Secretary General for Spain's biggest opposition party said the party’s 14 MEPs would not vote "for the father of austerity politics", the Spanish edition of the Huffington Post reported.

The move is, however, likely to have only symbolic value at the level of European politics, with Juncker expected to be confirmed as European Commission president for the next five years.

Sánchez's confirmation that the party won't vote for the Luxembourger demonstrates the 42-year-old's commitment to moving the party leftwards on the political spectrum.

Sánchez, who has told Spain’s El País newspaper that his role models include fellow youngster Italian Prime Minister Matteo Renzi, hopes to revitalize a party which has suffered heavy losses in recent elections.

Many in Spain blame the Socialists for the country's long economic crisis which has left one in four people out of work.

The PSOE picked up just 14 seats of a possible 54 for Spain in the May European Union elections, down from 23 in the previous European poll, with smaller left-wing parties making gains at the party's expense.

Sánchez, however, told El País on Monday he would "turn the party to the left" to give it a chance of winning in general elections to be held in Spain in 2015.

In another interview with Spanish radio station Cadena Ser, also on Monday, Sánchez — who has also ruled out any sort of 'grand coalition' with Spain's ruling Popular Party said the PSOE's project would be "socialist and realist".

It wouldn't be an "impossible project" or "populist" he said, in what may have been a reference to the new, left-wing Podemos party which was a surprise winner in May's European elections.

Podemos, headed up by the articulate Pablo Iglesias, collected 1.2 million votes in the May poll, taking votes from the PSOE in the process.