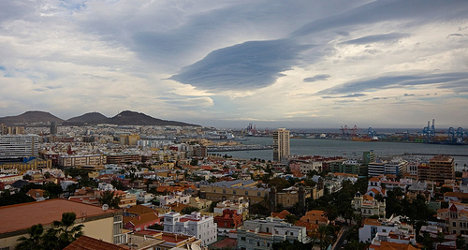 A view of Las Palmas de Canarias, the capital of Spain's Gran Canaria island. Photo: Coleccionista de instantes/Flickr
Her mother owned a three-storey building in the center of Las Palmas. After her death in 2007, Gloria was hoping to move back in, offer two floors for rent and live in the other one.

"I arrived from Madrid with my suitcase and the keys to the house, but it had disappeared," Gloria told Spain's El Mundo newspaper. "I had to sleep in a hotel".

It turns out the building had been taken down in 1999, as part of city plans to modernize the neighbourhood. But Gloria never found out because in the 1980s, "serious problems" with her father had forced her to leave the island in a hurry with her mother.

"We didn't tell anyone where we were going. We had to flee. We left our home and everything we had there".

For 20 years, the two women occupied a modest room in a shared apartment in the center of Madrid, without returning to Las Palmas.

“My mother was very sick and could not travel” Gloria explains.

Now aged 69, she survives on €365 ($500) per month and receives help from a food bank. She has no husband or children and faces serious economic difficulties.

By returning to Las Palmas, she was hoping to raise her standard of living. "We lived very well," she remembers. "we had a house in the center and an expensive car".

Gloria is now seeking €1 million in compensation, but still waiting to hear back from city authorities.

Her lawyer argues she should at least receive €164,753, which is the value of the property taken from her.

"It is not only about the money,” Gloria adds. "There were family pictures, paintings, clothes…All my family memories".