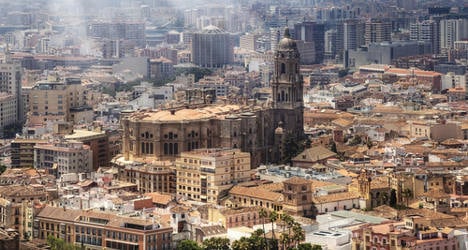 Malaga on Saturday became the latest location for Buzi's philanthropic initiative, which involves the hiding of money-stuffed envelopes in cities around the world.

These cash drops are advertised on Twitter with extra clues being provided to treasure hunters during the 'game'.

A recent version of the event in Madrid went off without a hitch.

But Malaga's event was little short of "chaotic" after a local newspaper informed readers ahead of time the envelopes would be hidden in a local park, according to Spains' El Mundo newspaper.

The man charged with hiding the cash was then forced to change plan and chose to hide the money on a pathway leading up to Malaga's Gibralfaro Castle.

He tweeted this information via the @HiddenCash Twitter account, but only at 4pm, according to local daily Diario Sur.

He also made the decision not to post further tips where to search on the alternative @HiddenCashmlg account.

As a result, most people continued to search in the original location, becoming increasingly frustrated at their lack of success.

That frustration was also felt by city authorities in Malaga.

On Monday, they announced they had been left with a €2,000 staff overtime bill after treasure hunters trampled plants and damaged manholes.

Staff also had to clear up all the rubbish left behind by people hoping to find the hidden money.