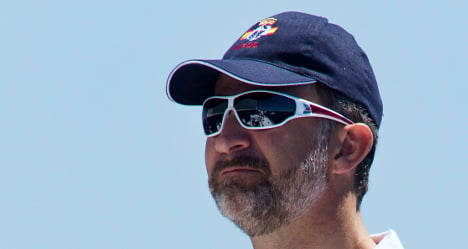 Felipe had already drawn a generational line in the sand when, just two days into his rule, he and Queen Letizia laid on the first royal reception for Spain's large gay and lesbian community.

Last week, he again broke with tradition — albeit on a smaller scale — by heading to downtown Madrid with five friends for dinner at a fashionable Asian restaurant in central Madrid's Chueca district.

The restaurant, Bazaar, was described as being "very affordable" by Spain's Vanitatis newspaper.

The group then paid an unscheduled visit to the capital's cultural centre El Círculo de Bellas Artes, with the monarch paying the standard €3 ($4) cover charge to visit the building with its popular terrace and bar, Spain's El Mundo newspaper reported.

But attempts by the casually dressed 1.98 metre-tall (6 foot 6 inch-tall) king to go unnoticed on the night were thwarted after several press photographers tried to take his picture as he left the Chueca restaurant.

This led to a brief but heated exchange with Vanitatis claiming members of Felipe's security detail slapped and pushed the journalists — the first run in between Spain's new king and members of the press corp.