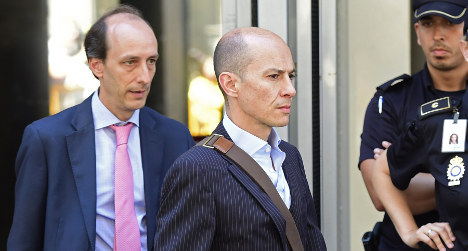 Let's Gowex boss Jenaro García appeared in Spain's High Court on Monday a week after he confessed to cooking the tech company's books.

The presiding judge freed García, once a rising star of Spanish business, giving him two weeks to stump up the €600,000 sum required to keep him out of prison.

The judge also withdrew the tech boss's passport as a precautionary measure.

The spectacular collapse of Spanish Wi-Fi provider Let's Gowex has made foreign investors jittery about Spain, with fears that the country's stock markets are poorly regulated.

The firm had contracts to provide free Wi-Fi in major cities, including Madrid and Paris and its share price rose 60 percent from 2012 to 2013 on Spain’s Alternative Stock Market (MAB), the country’s secondary exchange where a number of tech firms are floated.

That all changed with the July 1st publication of a damning report by the US investment firm Gotham City Research, claiming that Let’s Gowex’s results were largely fabricated and its stock absolutely worthless.

MAB overseers suspended trading in Let’s Gowex stock after its value fell by 60 percent in the two days after the Gotham report surfaced.

García then admitted to falsifying company accounts and has since apologized to employees in an open letter.

The company has made a preliminary filing for voluntary bankruptcy.