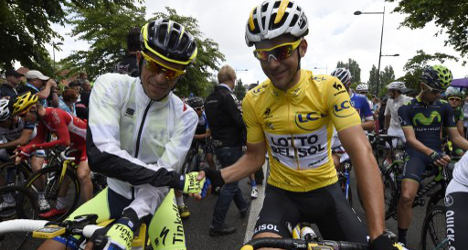 The Spaniard's withdrawal was the second major abandonment of the 101st edition of the Grand Boucle following that of reigning champion Chris Froome last Wednesday.

Contador crashed around the 65km mark of the mountainous 161km stage from Mulhouse to La Planche des Belles Filles.

The 31-year-old received lengthy treatment by the side of the road to patch up his injured right knee before he changed bikes and carried on.

He had lost around four minutes on the peloton by this time, after which his main rival Vincenzo Nibali's Astana team took over pace-setting at the front.

Despite five of his Tinkoff-Saxo teammates dropping back to help pace him back, he started losing more time.

Around 15km later and about halfway through the stage, Contador shared a hug with chief lieutenant, Australian Michael Rogers stopping by the side of the road and climbing into a team car.

He was in floods of tears.

On Wednesday Briton Froome crashed twice before climbing off his bike and quitting the Tour.

He had already injured his wrist the previous day in a crash and an MRI scan on Thursday showed he had fractures to his left wrist and right hand. 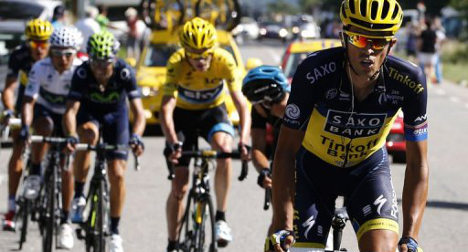 Froome came over the finish of the 168 km 16th stage over 11 minutes behind winner Rui Costa of Movistar to maintain his 4min 14sec lead over Dutchman Bauke Mollema and his 4:25 cushion on former two-time winner Contador.

However the Team Sky leader skirted with disaster, narrowly missing colliding with Contador when the Saxo team leader lost control after a tight right-hand bend on a notoriously dangerous descent.

Froome, who left the road and had to unclip from one of his pedals, eventually came over the finish admitting he was "happy to get to the finish without too much damage".

But the Kenyan-born Briton hit out at what he labelled "desperate" tactics by Contador's team.

"I personally feel that some teams are starting to get desperate now and are taking uncalculated risks," said Froome, who has held the race lead since winning stage eight at Ax-Trois-Domains in the Pyrenees.

"It seemed that (Roman) Kreuziger and Contador were taking it in turns to come from the back with a bit of acceleration and try to force a small gap on the descent, hoping that we'd lay off and give them a bit more space.

"On this particular corner, Contador just came through fairly quickly and he struggled to hold on to his bike, to keep control of it, and he crashed just in front of me.

"I went off to the left, slightly off the road. But there was a lip there so I had to unclip to get back on to the road."

"If you ask me, it was dangerous for Alberto to do that. There was no need for it."

Contador has so far been dominated by Froome in the high mountain stages of the race, forcing the Spaniard to take every possible opporunity to close his deficit before the race finishes on Sunday.

The Spaniard, who also escaped unscathed from the incident, was unapologetic.

And his team sporting director Fabrizio Guidi warned: "Going for the overall (victory) is not just something we say. We showed today that we keep on putting the pressure on Froome and we're willing to take chances.

"I'm really proud of the way we handle this situation. We're still fighting as a team and we remain focused on the job."

The twisting descent into Gap from the summit of the Col de Manse is notoriously dangerous.

In 2003 Joseba Beloki attacked American rival Lance Armstrong on the descent of the Rochette, which is higher up on the same descent, braked hard on melting tarmac and broke his hip. Armstrong, who was in hot pursuit, raced through a field to avoid hitting the Spaniard and carried on the race.

Froome admitted: "I knew it was the descent where Beloki crashed so I was trying to lay off a little bit. I don't like taking risks on descents like that."

With an overnight lead of over four minutes, Froome could, on paper, have taken a more conservative approach.

Asked why he followed Contador and put himself in a potentially dangerous position, Froome replied ironically: "Yes, I should probably have let him go up the road and take the yellow jersey."

Froome retained his lead of 4:14 over Mollema and still leads Contador by 4:25.

But now, he is taking nothing for granted until he reaches Paris on Sunday.

"Like we've seen today, this race is far from over and one incident in the wrong moment and you're Tour can be over. You could be going to the finish and about to win the race and the next you're lying in a ditch with broken bones.

"In my mind, the tour is not over until we cross the line at the Champs Elysees."