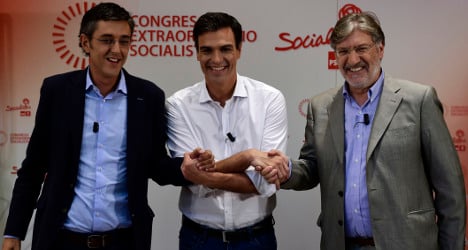 Voters turfed the Socialists party — Spain's largest opposition party — out of seven years in power in a crushing November 2011 election defeat, punishing them for a recession, mushrooming debt and sky-high joblessness.

Indeed, their position may be even more precarious: in elections for Spain's seats in the European Parliament on May 25, the Socialists attracted a paltry 23 percent of the vote, losing nine of their 23 seats.

It was the final blow for their secretary general, Alfredo Rubalcaba, a wily 62-year-old career politician who announced his departure the next day.

Now the Socialists are hoping to put on an attractive new face.

A front runner in the three-way leadership race is a telegenic, dark-haired 42-year-old economist and member of parliament Pedro Sánchez — popularly known as El Guapo, or The Handsome One.

Sánchez was endorsed by 41,338 party members to become an official candidate in Sunday's direct election by the party's nearly 200,000 members.

He has emerged as a serious challenger to 38-year-old Eduardo Madina from the Basque country, who lost the lower half of his left leg in a 2002 bomb attack carried out by the Basque separatist terror group Eta.

Madina, the leader of the Socialist bloc in the lower house of parliament, garnered 25,238 endorsements for his candidacy.

The third candidate, 59-year-old José Antonio Pérez Tapias — a party veteran and university professor from in the southern Spanish city of Granada — who favours a swing to the left, was endorsed by 9,912 party members.

Even if Sánchez wins, he will need more than chiselled features to give the 135-year-old centre-left Socialist Party a shot at power.

Spain's conservative ABC newspaper described Sánchez as a reformer who challenges German-style economic austerity and pursues a Socialist message without ceding to populism.

He faces a huge challenge to change the party's fortunes, however.

The party has been stuck in the doldrums since then premier José Luis Rodríguez Zapatero stepped down in 2011, accused of reacting too slowly to an unfolding economic crisis, which has left one in four people out of work.

"What is clear is that we have not regained citizens' trust, in part because lots of people are having a hard time, and they have been having a hard time for a while. In fact, they started having hard times when we were in government," Rubalcaba, who was previously Zapatero's deputy, admitted in May.

As in austerity-hit Greece, smaller insurgent parties that tapped into voter discontent with traditional politics were the main winners in the European vote that prompted this weekend's Socialist Party leadership elections.

Even as the Socialists slumped, Podemos, a new left-wing party born out of Spain's "Indignant" movement against economic inequality, won five seats in Europe's parliament.

Whoever wins on Sunday, the Socialist Party members' choice must be validated by an extraordinary party Congress of party delegates, to be held July 26th-27th in Madrid.

Complicating matters further, the Socialist Party's candidate for prime minister in the 2015 elections will be chosen by a separate, direct poll of party members in November, a scheme endorsed by all three of the party leadership candidates.

Tapias, however, will not run in the election for the prime minister's job if voted to become party leader. In a recent debate between the three candidates for the leadership job, he said the two jobs should not be held by the same person.