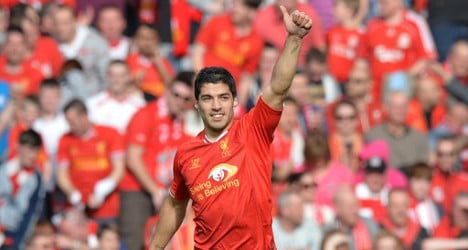 Suarez "will be travelling to Barcelona next week for a medical, to sign his five-year contract and to be officially presented to the media and fans as an FC Barcelona player," the club said in a statement.

"Liverpool FC confirms that Luis Suarez will be leaving the club after a transfer agreement was reached with FC Barcelona," a statement read.

"The player now has permission to complete the usual formalities, which will then conclude the transfer.

"We would like to thank Luis for his contribution and the role he played in helping bring Champions League football back to Anfield.

"Everyone at Liverpool Football Club wishes Luis and his family well for the future."

No details of the fee nor how it is to be paid were disclosed and Suarez, currently serving a four-month ban for biting Italy's Giorgio Chiellini at the World Cup, is set to be confirmed as a Barcelona player next week.

He will be first available to play on October 25th, or three months after the 2014–15 Spanish Primera Liga season starts.

Spanish sports paper As cited an unconfirmed signing fee in the region of between €75 million ($102 million) and €80 million while the UK Guardian newspaper said the figure could be as high as £75 million (€94 million, $128 million).