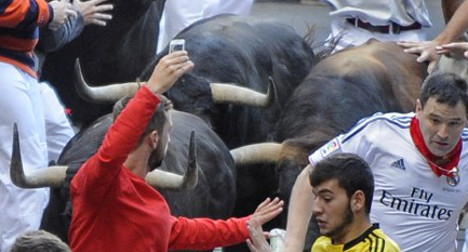 The daredevil in the photo above may be the first to have to pay a €3,000 fine for taking a selfie during the bull run. Photo: Rafa Rivas

Authorities in the northern region of Navarre have passed a bylaw this year aimed at clamping down on the usage of filming devices during the treacherous ‘encierros’ (running of the bulls).

So far three people, all of them British citizens, have been fined.

One of the men had to pay €200 for crossing a security line (despite his claims that the information was only announced via megaphone in Spanish and Euskera) whereas another Brit had to cough up €650 for filming the bull run with a drone.

If anyone does seriously disturb the encierro and put other people’s lives in danger by filming or taking pictures while running with the bulls, they will have to pay €3,000.

The daredevil in the photo above may be the first to have to do so after Spanish public television TVE filmed him taking a selfie with his phone as the 700-kilo bulls came within centimetres of goring him.

Ironically, TVE producers have got themselves into a spot of trouble after they encouraged participants to “send their best San Fermin selfies in to win a prize”.

Since the controversial photo above went viral, they have tweeted: “Be careful, we didn’t quite mean that” in response.

San Fermin has become a global tourist attraction, with tens of thousands of Spaniards and foreigners pouring into the Navarran capital.

Many bull run participants take part after drinking and dancing almost all night.

Fifteen people have been killed in the bull runs since records began in 1911. The most recent death occurred five years ago when a Spanish man was gored.

Four Spaniards and one American have been gored so far this year in the festival, which wraps up on Monday.

A 2011 study by Pamplona city hall found that of the 20,500 people who took part in the festival's eight bull runs that year, only six percent were women.

Nearly half of the people who took part in the bull runs that year came from outside Spain, mostly from Australia, Britain and the United States.