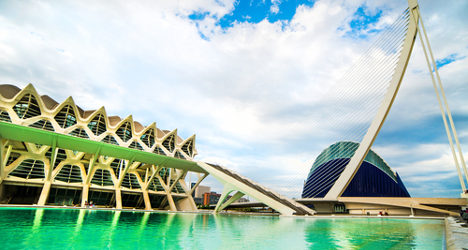 Valencia's City of Arts and Sciences, which opened in 1998, was a landmark project in the city's revitalization: Shutterstock

The Commission will investigate the region over suspicions it provided incorrect deficit statistics for 2011, according to Spain's El País newspaper.

"The investigation will examine if the incorrect declaration was deliberate or a result of serious negligence," said the Commission in a statement.

Investigators will also look at whether those false statistics distorted national deficit and debt statistics for Spain.

But Brussels stressed the accuracy of the work done by Spain's national statistics office was not being called into question.

Indeed it was Spain's national statistics agency, the INE, that first informed the EU statistics office Eurostat of the incorrect Valencia figures in May 2012.

"I want to stress that this investigation is only related to one region (Valencia) and one type of cost, which is health spending," said Commission spokesperson Emer Traynor at a press conference on Friday.

Valencia's government responded by saying it was "concerned" by the news and would carry out its own investigation "as soon as possible".

It is also means more bad news for Valencia which has been in the headlines for all the wrong reasons in recent years.

Once the beacon of Spain’s economic vitality, Valencia has been crippled by years of free spending and the country’s building boom .

The regions €150-million ($204 million) Castellón airport has also come to symbolize the wasteful spending of Spain before the economic crisis.

It was opened in March 2011 to much fanfare. However, not a single passenger has ever checked in.

Former regional president Francisco Camps resigned in 2011 after it emerged he was being investigated for his possible involvement in the complicated Gürtel affair in which senior members of Valencia's government are alleged to have received presents and cash backhanders in return for handing out public contracts.