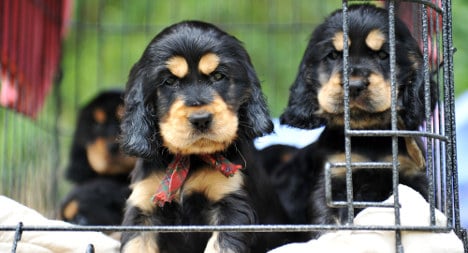 If passed, the draft law would mean only licensed breeders and shelters could sell or hand over pets to their new owners, with offenders facing fines of up to €30,000 ($40,000).

“I doubt it will be passed, it’s all a pro-animal rights publicity stunt by the government,” Sergio, an employee at nationwide pet store Interzoo, told The Local.

“Pet shops aren’t to blame for the alarming animal abandonment figures in Spain. The government’s move is really geared towards tackling the neglect of hunting dogs and animal trafficking from Eastern Europe”.

In its draft law, Spain’s ruling conservative party is also looking at regulating the sale of pet dogs and cats for occasional and habitual breeders, a stance which animal groups blame for the average rate of 400 pet abandonments every day.

“We’re in favour of this law but remain very sceptical over whether it will ever be passed,” Laura Duarte, spokesperson for Spanish animal rights party PACMA told The Local.

“Banning the sale of cats and dogs in pet shops goes against free commerce and therefore doesn’t stand for the Popular Party’s policies.

“The government isn’t stupid; all we see on the news in Spain right now is bulls drowning in one festival, other bulls speared in another. They want to give the impression they’re protecting animals.

Duarte is a firm believer that Spain’s high rate of animal abandonment is the product of the government’s non-existent control over breeding in Spain and to a lesser extent “the lack of awareness” Spaniards show towards their animals.

“People can act with impunity when breeding, selling, owning or abandoning animals in Spain whereas in other parts of Europe all this is regulated,” the PACMA representative explains.

“2,000 pets are abandoned every summer day in Spain, usually because people don’t know what to do with their animals when they go on holiday and also because they bought their puppies or kittens impulsively as Christmas presents and after six months the novelty is wearing off.

“We live in a country where public money is used to pay for festivals in which animals are tortured and killed,” Duarte concludes.

Although Spain’s ruling Popular Party continues to defend bullfighting and other festivals slammed at home and abroad for their degree of animal cruelty, the ‘cats and dogs’ law would see animal torturers and killers slapped with fines of up to €200,000.

Using pets for begging and buying pets from abroad would also result in monetary sanctions.