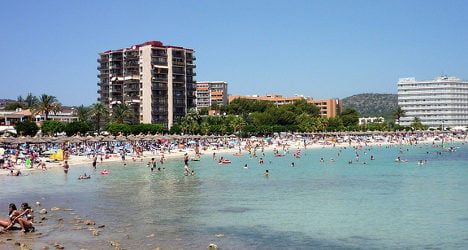 The popular holiday destination of Magaluf in Majorca. Photo: Chris/Flickr

The teen had arrived on the island only hours before and was looking for summer work, according to local newspaper Diario de Mallorca.

He had been drinking with friends and had just returned to the Nova I Magaluf holiday apartment complex when he fell from the balcony, landing on a concrete surface near a swimming pool, the paper said.

He was taken to the island's Son Espases hospital with serious head and arm injuries. These are not thought to be life-threatening.

"He's a great guy. He is a serious person who had come to work here for the season," a visibly affected young British tourist told Diario de Mallorca.

"I heard him and three other friends when they were on the balcony. After that I don't know what happened," he added.

Authorities are now looking at the possibility that the teen lost his balance while trying to jump from one balcony to another, or that he was trying to leap into the swimming pool below.

Such activities are part of the popular but highly dangerous trend of 'balconing'.

Wednesday's incident also took place near the popular drinking strip of Punta Ballena which captured headlines recently after a video of an oral sex competition at a local bar went viral.

Local authorities slammed the incident while the Spanish secretary of state for tourism said she would be meeting in Madrid with the Balearic Islands tourism chief, Jaime Martínez, representatives of the British Embassy and UK tour operators to drive forward a joint institutional campaign to prevent such unsavoury incidents.

The secretary of state said that members of the Balearic government and Spain’s tourism office in London were already working on a publicity campaign that would be finalized in the coming days.