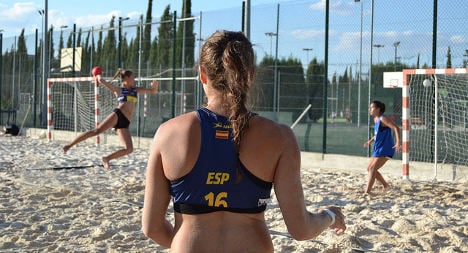 Under European regulations, female beach handball players have to wear bikini tops and bottoms that are no wider than 10 cm. Photo: Rfeb/Flickr

“(It) infringes on principles of equality, it’s sexist and it puts the appearance of the players before their technical capabilities,” Izaskun Bilbao, Member of the European Parliament for the Basque Nationalist Party has said.

Under regulations set by the European Handball Federation, female beach handball players have to wear bikini tops and bottoms that are no wider than 10 centimetres or face penalties.

Male players, however, have more lenient restrictions on the lengths and type of sportswear they must use.

“This isn’t so that female players are more comfortable or play better,” the Basque Women’s Institute told the Spanish edition of the Huffington Post.

“(The rule) is there so that the girls’ bodies lure people to the sport, it has nothing to do with sporting values.”

The Basque Handball Association has presented an official complaint to the European Commission to have the rules changed.

Supporters of the move have already won the first battle after Spain’s main sports council described the regulations as “sexist”, allowing female beach handball players to choose their uniforms when playing national matches.