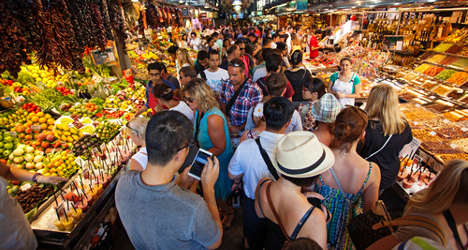 So far there is no definite plan in place to control the large numbers of people who pass through the close-knit stalls in La Boqueria.

But a request for action has been passed on by the city’s tourism office to City Hall to limit access by large tour groups with the market’s management arguing that their presence actually hinders the amount of business traders can do.

A spokesperson for the Barcelona Vibes and DMC Solutions travel and leisure firm, which includes visits to the market as part of its activities, told The Local that the company could be adversely affected by any restrictions. Explaining that groups who are doing a cookery course visit La Boqueria to get inspiration before a class, she said: “It’s part of our product.”

“I know that it’s disturbing for the people working at, say, a fish stall to have 100 people looking at an octopus,” but if “they decided that we could not visit in the afternoons, for example, that would be a huge problem, not just for us, but all the agencies in Barcelona.”

The spokesperson adds that there are other markets in the city but these are “not as beautiful” as La Boqueria, which has stood at its current central site in the city since 1840.

La Boqueria’s manager, Òscar Ubide, explained to The Local that while he understands that tourism is vital to Barcelona’s economy, large groups create overcrowding in the market and actually prevent trade rather than boosting it.

“They go once around the market, if anyone from the group were to stop and buy something, they would get lost,” Ubide said, adding that the majority of the stallholders agree with the idea to manage the times of such visits.

“Those that don’t haven’t grasped the message [that] this is not against tourism; what we are against are these large groups that don’t buy anything”.

Ubide said that La Boqueria receives some 45,000 to 50,000 visitors per day, but rejects the idea that the market is a victim of its own success.

He cited London’s Borough Market as another busy food-selling venue which is similarly concerned at overcrowding and its effect on trade. Ubide said that he was still waiting for an official response to the proposal but was confident that an acceptable agreement would be reached.

Barcelona welcomed a record 7.5 million visitors in 2013, with 80 percent coming from overseas, according to Turismo de Barcelona.