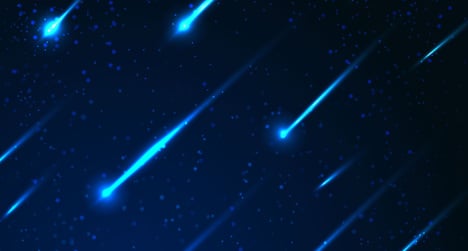 Photo of a meteor shower: Shutterstock

The small earthquake measuring 1.9 on the Richter Scale hit the Lleida region of Catalonia at 11.16pm on Tuesday.

The epicentre of the quake was 5 kilometres (3 miles) from the town of Alpicat, Catalonia's Cartographic and Geological Institute (IGC) said.

Emergency services received 15 calls after the quake from people in the town saying they had heard an 'loud noise' just before the quake.

Social media sites were then filled with reports of a possible asteroid strike after some neighbours reported seeing a flash of light in the sky in the lead-up to the seismic activity.

But IGC experts said the evidence pointed to an earthquake and that locals had probably seen reflected moonlight.

The IGC said if there had been a meteorite strike, the light show would have been so spectacular and long-lasting that the noise and the earthquake would likely have gone unnoticed.

Researchers said the the noise was the result of the town being so close to the epicentre of the earthquake.