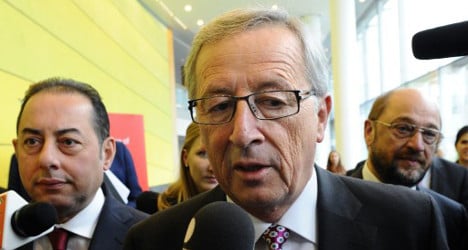 The leaders of Spanish region of Catalonia have been pushing for a November 9th vote to test public support for the idea of a new Catalan state, with many people in the region believing that Catalonia would be better off going it alone.

But Catalans hoping for a helping hand for their independence cause from the president-elect of the European Commission could well be disappointed.

"I'm not arrogant enough, nor do I have the desire, nor the madness, to meddle in debates that affect the territorial organization and politics of different EU states," said the conservative president-elect of the European Commission in a meeting with members of the Greens–European Free Alliance grouping in the EU Parliament.

"It (the Catalan independence issue) is something that Spain will have to deal with," said Juncker in response to a question from Josep Maria Terricabras, a politician with the region's Republican Left of Catalonia (ERC party).

Asked whether he would respect the results of a September 18th vote on the on the possible independence of Scotland from the United Kingdom, Juncker said yes, but was also firm in terms of the consequences.

European Council President Herman Van Rompuy has previously stated that if part of an EU country became independent, it would cease to be part of the EU and would have to reapply for membership.

"One doesn't become a member of the EU by sending a letter," Juncker said on Wednesday, referring to a letter sent by Catalan President Artur Mas to major European leaders in February outlining the region's reasons for wanting independence.

The Spanish Parliament has declared the planned unilateral November 9th vote in Catalonia illegal on the grounds that all Spaniards have the right to vote on whether a single region can become independent.

But Catalonia's leaders have vowed to push ahead with the planned move.