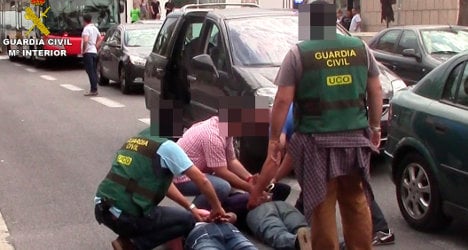 The Civil Guard said the group could deliver immediately a sample of between three and five Igla surface-to-air missiles kept in an undisclosed location in Eastern Europe. Photo: Guardia Civil

The police operation, which was prompted by an investigation by the Southern District of New York US Attorney’s Office, was carried out in cooperation with the US Drug Enforcement Administration (DEA) and security forces in the Netherlands and Colombia.

In May of this year the Civil Guard was informed of the DEA investigation into a narco-network spanning several countries in Europe, America and the Middle East. This organisation was allegedly using Spain to negotiate large shipments of heroin into the United States.

The Civil Guard said the group was in a position to deliver immediately a sample of between three and five Igla surface-to-air missiles kept in an undisclosed location in Eastern Europe, as well as offering to supply more missiles at a future date.

After tracking the suspects’ movements in Catalonia over a period of weeks, the Civil Guard finally detained the four individuals as they exited a luxury hotel in central Barcelona on June 17th. The four men, who were about to leave the country at the time of their arrest, have been identified by the Civil Guard as A.W.C.P.K., a 49-year-old of Pakistani origin; A.H.C.P.K, also Pakistani, 47; M.S.S., a 34-year-old of Indian origin; and D.A., a Russian national of 31.

All four were subject to international arrest warrants on the suspicion of membership of a criminal organization, drug trafficking and money laundering.

The suspects will remain in custody in Spain while the procedures for their extradition are being completed.