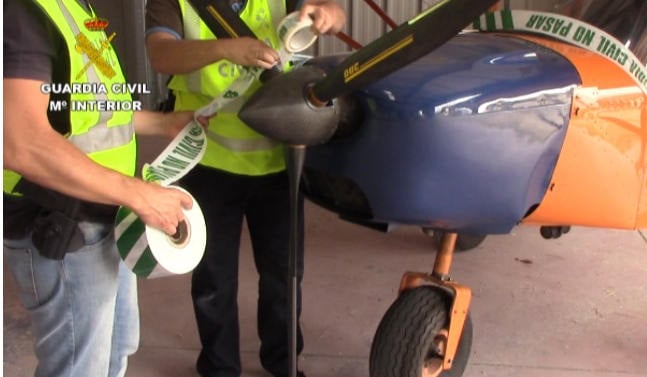 One of the planes used in the nightime hashish runs. Photo: Guardia Civil

The gang’s modus operandi was to smuggle Moroccan hashish into Spain aboard planes flying at very low altitudes to avoid showing up on radar during night-time hours or at dawn.

According to the Civil Guard, the planes would depart from Spanish airfields at night. The pilots did not use flight plans or activate the aircraft’s transponder in order to make identification and location more difficult. Over in Morocco, the drugs would be waiting in a location between Tangier and Larache, on the country’s northern Atlantic coast.

On returning to Spain, the planes landed in fields or country lanes, where vehicles were assembled with which to collect and distribute the cannabis. Only then were the aircraft returned to hangars at local airfields.

In the early hours of June 14th, the Civil Guard intercepted two planes as they flew in a load from Morocco, arresting one pilot and identifying the other plane, whose pilot escaped immediate detention after performing what the police force described as "risky manoeuvres".

Two others were arrested on that morning with other detentions having been made since then in both Spain and Morocco.