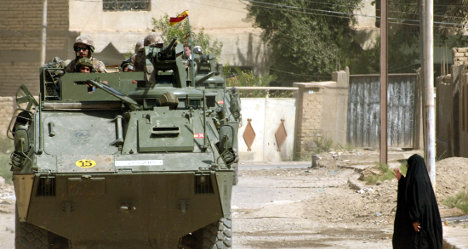 The legionniare has been locked up in Madrid's Alcalá de Henares military prison while investigations against him continue.

The case broke after Spain's El País newspaper in 2013 released video footage of three soldiers brutally kicking two prisoners lying on the floor of their cell.

Two other soldiers stood in the doorway watching while a sixth filmed the scene in what the military later said "could be" the Spanish military base of Diwaniya, Iraq.

In April, a soldier testified on the matter, explaining the two prisoners filmed had entered the base, leading a donkey loaded up with explosives.

"They were curled up against the wall, frightened like puppies," he said of their state after the attack.

Investigators are now trying to identify all of the soldiers involved on that night. They are want to find commanding officers who may have known about the incident but failed to carry out punishment.

If found guilty, those soldiers could face anywhere from 10 to 25 years in prison.

The army has said no higher officers were aware of the incidents and "didn't even suspect that prisoners were being mistreated".

They said the case was an isolated one and shouldn't be seen as a reflection on the work of the 130,000 Spanish soldiers who had participated in international missions in the last two years.

In February, Spain's government defied opposition pressure and voted to shelve high profile international investigations into crimes including alleged Chinese genocide in Tibet and possible torture in the US prison facility of Guantanamo Bay.

It is part of changes to the legal system which will mean the country's courts can only investigate crimes either involving Spaniards or taking place on Spanish soil.

In March, a judge refused to close the file on the death of a Spanish cameraman during the US invasion of Iraq in 2003.