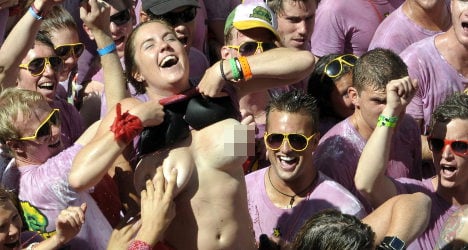 Making a clean breast: Pamplona wants to stamp out sexist behaviour including breast grabbing during the city's running of the bulls festival. File photo: Javier Soriano/AFP

Among the barrage of rules covering behaviour at the event, which runs from midday on July 6th to midnight on July 14th, Pamplona City Hall has launched a campaign to prevent what it sees as sexist abuse toward women during the bull-running party, at which many people consume large quantities of alcohol.

Besides the spectacular running of bulls through the medieval streets of the Navarre region’s capital, as celebrated by Ernest Hemingway, one of the strangest sights of recent years at the San Fermín festival has been that of mass groping of women, sometimes after the individual in question has exposed her breasts.

Last month Pamplona’s deputy chief at the Social Welfare and Equality department, Ana Lezcano, launched the campaign called 'Free the festivities of sexist attacks', citing the groping of women as a specific problem of the festive week, but also a general atmosphere during San Fermín in which grave cases of sexual attacks and harassment by men take place.

The central idea of the campaign is that the festive sites be "safe places in which the attitude and respect of men and women allows girls and women to enjoy themselves, without the risk of violence and sexual assaults, however grave these may be".

This year’s set of city rules drawn up by the city council allows for fines of up to €3,000 ($4,000) for breaches, many of which refer to safety during the bull runs.

The specially formed campaign group Sanfermines in Equality has laid down its own set of commandments to try to dissuade male revelers from ruining the party for the other half of the population. Their nine campaign points, which will be visible in Pamplona during the festivities, underline that not everything is permitted during the event and that the consumption of drink or drugs does not justify assaults.

"Someone exposing their body is not a reason to assault or strip them, and even less so as a group," reads one of the warnings.

“During the celebrations, NO still means NO,” is the final point.