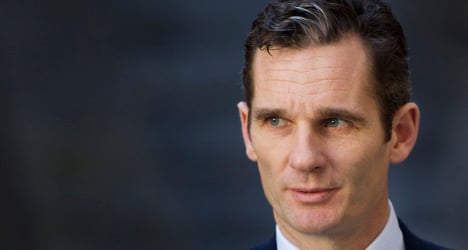 Iñaki Urdangarin, the brother-in-law of Spain's King Felipe, is accused of creaming off €6million ($8 million) in public funds from a non-profit sports foundation. Photo: AFP

Accountant Marco-Antonio Tejeiro, a fellow suspect in the fraud case facing Urdangarin, offered the first direct testimony against the 46-year-old former Olympic handball player who is the husband of Felipe's sister, Princess Cristina.

The scandal soured the reign of former King Juan Carlos, who tearfully handed the crown to his son last month.

Felipe, 46, took the throne on June 19th promising an "honest and transparent" monarchy.

Now he has to deal with the scandal's fallout, including the threat of his 49-year-old sister facing an unprecedented criminal trial on related tax and money-laundering charges.

Urdangarin is accused along with a former business partner, Diego Torres, of creaming off €6million ($8 million) in public funds from contracts awarded to Nóos, a supposedly non-profit foundation.

In his testimony, Nóos's former accountant Tejeiro alleged fake billings and hirings by the two men, backing up the state's case against the pair.

"The profit that should have been pooled within the Nóos Institute was not used for the ends and means of the association but was transmitted to the private companies of Messrs. Torres and Urdangarin," Tejeiro said.

He alleged fictitious billing, for example, when the pair's Noos Institute charged the regional governments for organising a summit in Valencia and a forum in the Balearic Islands.

"The invoices for this did not correspond to services actually rendered but were a way for Mr. Torres and Mr. Urdangarin to share out the profits from the Noos group for their respective businesses," he said.

But the testimony did not implicate Princess Cristina in any way, underscoring that Torres and Urdangarin "led the group as its bosses, having absolute control and decision-making power over it".