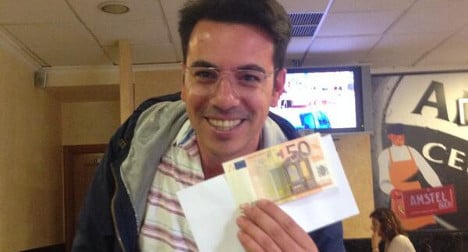 One of those fortunate enough to find hidden cash in Madrid's Retiro park on Thursday tweeted this photograph. Photo: Twitter/Kityn

Followers of the @HiddenCash account on Twitter were able to read the following message on Thursday morning: “26 envelopes with 50 euros ($68) in each in Retiro park, near here!” written in reasonably accurate Spanish.

One of those fortunate enough to find hidden cash in the Retiro park on Thursday posted this photograph, which was then retweeted by Hidden Cash.

Another message from the Hidden Cash account, an initiative apparently funded by Californian real estate millionaire Jason Buzi, expressed concern about the morning rain in Madrid spoiling the financial fun, but soon photographs of happy finders were appearing on the @HiddenCash Twitter feed.

In total, €1,300 is said to have been deposited around Madrid’s central park, the Spanish capital joining cities such as San Francisco, New York, Las Vegas, Mexico City and Chicago as the latest venue for this “social experiment,” Spanish newspaper 20 Minutos reported.

The initiative could also be seen in Spain as light relief from a stream of high-level corruption stories, such as the Bárcenas case as part of which ruling Popular Party politicians have been accused of illegally receiving cash-stuffed envelopes.