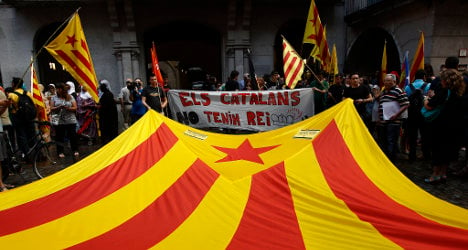 Pro-independence supporters during a demonstration against the Spanish monarchy and in favour of the independence of Catalonia in Girona on June 26th. Phot

The Catalan National Assembly (ANC) on Tuesday published the plans on its website.

There are also plans for voluntary military service and a reserve force to be called up in the event of foreign invasion or terrorism threats.

Also included in the plans are provision for a Catalan navy with 2,000 troops according to Spanish newspaper ABC.

That force could be trained by a foreign military force, with the UK being suggested, the paper added.

The ANC on Tuesday stressed the plans were not the official position of the group, but reflected the results of research carried out by its defence working party.

The group has unveiled a "roadmap", which calls for the region to declare independence from Spain by April 23, 2015 — the feast day of Saint George, the patron saint of Catalonia.

Last year on September 11th, Catalonia's national day, hundreds of thousands of people formed a human chain across the region to demand independence in a rally organized by the group.

The region's political leaders have called for a November 9th 2014 non-binding referendum on the issue of independence for the region, a move Spain's central government has said is illegal.