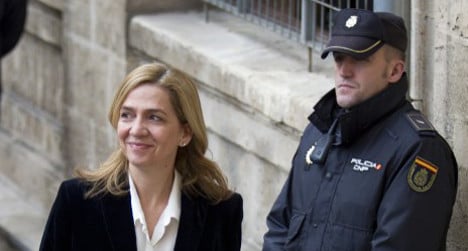 "Princess Cristina's defence has lodged an appeal with the Court of Palma," the court in Palma de Mallorca said in a brief text message to journalists.

A 60-page document was presented to the presiding Majorca judge José Castro at 1.20pm.

If Cristina ends up in the dock, it would be a first for a direct relative of the Spanish monarch, creating a significant challenge to Felipe who took the throne on June 18th promising an "honest and transparent monarchy".

But the 49-year-old, blonde-haired princess's lawyers are seeking to overturn investigating judge Jose Castro's June 25th ruling, which upheld tax fraud and money-laundering charges against her.

The investigating judge on the island of Mallorca accused Cristina of knowingly benefiting from suspect business dealings by her husband, 46-year-old former Olympic handball player Inaki Urdangarin, who is himself accused of embezzlement, along with his business partner Diego Torres.

A final decision on any trial must be taken by the provincial court in Palma de Mallorca.

The princess's lawyer, Miquel Roca, told journalists in Barcelona that he was convinced of her innocence.

"It is not a problem of optimism or pessimism, it is a question of absolute conviction of the innocence of our client," Roca said shortly before submitting the appeal.

"We are convinced that the court will resolve this in a manner that we believe to be convenient. But we will see."

The investigating judge is at odds not only with Cristina's defence team but also public prosecutor Pedro Horrach, who filed an appeal last week calling the judge's decision "a sly manoeuvre, an escape route for an inquisitorial spiral fed by mere suspicions".

Urdangarin is accused along with a former business partner of creaming off €6million ($8 million) in public funds from contracts awarded to Noos, a charitable foundation.

Investigators suspect that a separate company jointly owned by the couple, Aizoon, served as a front for laundering embezzled money.

Questioned in court by Castro in February, Cristina said she had simply trusted her husband and had no knowledge of his business affairs.

A smiling mother of four with a master's degree from New York University, Cristina was once considered untouchable as a member of the royal family.

But the so-called Noos affair fanned public anger against the monarchy and the ruling class during the recent years of economic hardship in Spain.

Urdangarin and Cristina have been excluded from royal activities since 2011, and Cristina did not attend the recent enthronment of her brother King Felipe.

Uradangarin also appealed his court call-up on Wednesday. His lawyer Mario Pascual Vives repeated that Urdangarin has committed no crimes as head of the Nóos Institute or Aizoon, Spain's ABC newspaper reported.