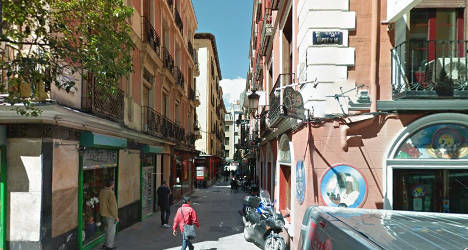 The body of Anne Strande Jensen was found in a burning Madrid apartment near the city's Puerta del Sol on June 13th.

Spanish police originally treated the death as accidental but an autopsy later revealed she had been strangled with a rope before the fire was lit, Spain's 20 minutos reported on Wednesday.

Police investigations showed the apartment doors had not been forced, suggesting the murderer was known to the Danish woman.

A fingerprint found on one of the apartment walls was also key in those investigations, according to Spanish national daily El Mundo.

A Google street view image of the neighbourhood where Jensen was murdered.

A police database search revealed that fingerprint belonged to a Belgian man employeed by the company that had rented the apartment to Jensen.

The print match came up because the man had previously arrested in Madrid on rape changes in 2011. He was subsequently released by a magistrate pending charges.

On June 18th, police arrested the man in a Madrid bar.

He then confessed to the murder, giving police details of the crime scene that would not be known to anyone else, Spain's 20 minutos reported.

Jensen, an employee of the Scandinavian Tobacco Group was only 11 days into a six-month assignment in the Spanish capital when she was killed, the Copenhagen Post reported recently.

DENMARK
How Denmark got its children back to school so soon after lockdown
DENMARK
Penélope Cruz to pay tabloid over topless pics
Url copied to clipboard!