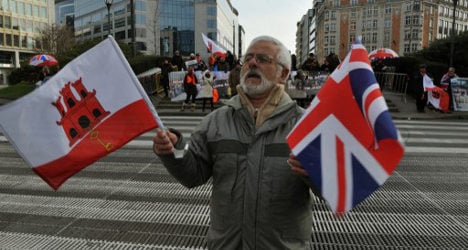 Gibraltarian residents demonstrate against police and customs controls between Gibraltar and Spain outside EU Headquarters in Brussels in January. File photo: Georges Gobet/AFP

Spain disputes British sovereignty over the peninsula, which has long been a point of contention in relations between the two countries, with tensions increasing over the last year.

The Foreign Affairs committee, a group of lawmakers who analyse the work of Britain's Foreign and Commonwealth Office, urged the government to "get off the fence and take a tougher line with Spain" in a report to Westminster.

It recommended the government increase diplomatic protests and summoning of the ambassador, and make London's support for Spanish aims on the international stage dependent on Madrid's action regarding the British outpost.

"The behaviour of Spain toward Gibraltar is unacceptable. We have a situation where a NATO and EU ally is deliberately impacting the economy of a British Overseas Territory," the committee's chairman Richard Ottaway said.

"We are giving entirely the wrong impression to Spain about how seriously the UK takes these issues."

Ottaway accused Madrid of increasing ship incursions into British waters and deliberately causing delays at the border between Spain and Gibraltar for political reasons.

He said Britain should threaten to take legal action against Spain if the situation does not improve within six months.

On Monday, Spanish activists removed part of the reef in an move which Britain's Foreign Office called an "act of vandalism".

Britain has ruled the area on the southern tip of Spain since 1713, and says it will not return the territory to Madrid against the will of the roughly 30,000 who live there, who wish to remain British.