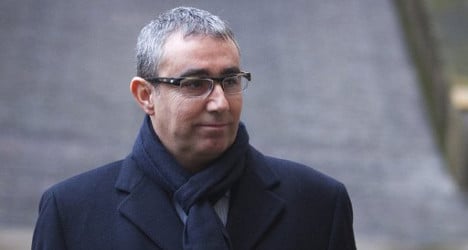 Diego Torres made the claim in his appeal against a recent ruling by Spanish judge Jose Castro which would see him and his wife in the dock on fraud and money laundering charges along with Spain's Princess Cristina and her husband Iñaki Urdangarin.

Judge Castro made the ruling after a two-year investigation into the so-called Nóos case in which it is alleged that Urdangarin and Torres, his partner, embezzled €6 million ($8 million) in public funds via the Nóos Institute, a charitable sports foundation.

Princess Cristina, a board member for Nóos, could potentially face 11 years in jail if found guilty of complicity.

The corruption case has made a huge dent in popularity of the royal family with some naming it as one of the reasons for the June abdication of King Juan Carlos.

But in Monday's appeal, Torres attempted to throw the spotlight on the royal family, saying he and wife had never been involved in illegal dealings.

He described Urdangarin as the "great controller" because of his connections to the royal family, while Torres and his wife were "peons", according to Spanish online newspaper Vox Populi.

Torres added the Urdangarin had not acted alone but that everything had been signed, sealed and authorized by top state officials.

Secret service agents had also copied the contents of their computer hard drives, he added, according to Spanish regional daily Faro de Vigo.

"How can the Royal Palace say without shame that they didn't know what was going on (at the Nóos Institute)?" Torres said, citing the fact that the authorities had been present at negotiations on the use of the royal's summer residence, Majorca's Marivent Palace for sports events.

Torres went on to claim ex-king Juan Carlos had even "sought clients" for the Nóos Institute.

The claims come a week after the Spanish parliament rushed through changes that will boost legal protection for former king Juan Carlos.

That move spelled an end to the legal uncertainty which confronted the former king after his recent abdication, a move which paved the way for his son Felipe to become the country's new monarch.