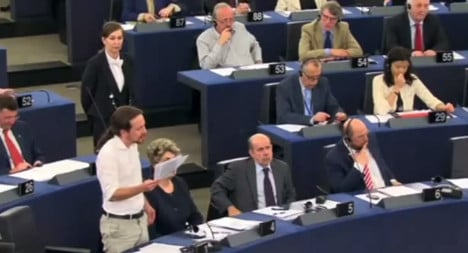 Iglesias, 35, made headlines recently after his new anti-austerity Podemos (We Can) party — formed just months before the European poll — picked up five seats in the European Parliament at the expense of established left-wing parties including Spain's major opposition party, the socialist PSOE.

Spanish commentators described the party's result as a sign of general voter dissatisfaction with Spain's major political parties in the wake of years of economic crisis and a series of high-profile scandals.

On Tuesday, Iglesias took to the podium in Strasbourg hoping to dislodge German Socialist Martin Schulz from his position as President of the European Parliament, using the same rhetoric that struck a chord with 1.2 million voters who chose him as their voice against austerity cuts at the recent European elections.

The leader of Podemos, who was running as a presidential candidate with the European United Left at the Parliamentary elections on Tuesday, called for MEPs from "southern and eastern Europe" to choose him to prevent the "kidnapping of democracy" in the EU.

Iglesias said he would put a stop to the "looting" mechanisms used on Europe’s crisis-hit countries by the "grand coalition", a reference to the austerity cuts imposed by the troika: the ECB, the IMF and the EU.

The ponytailed politician continued until Giani Pittella, Acting President of the European Parliament, asked him several times to finish, to which Iglesias replied in Italian: "It’ll only be 10 more seconds".

Iglesias and his speech made a big impression at the Strasbourg Parliament but were not enough to stop German Socialist Martin Schulz being re-elected as EU parliamentary president for another two-and-a-half-year term.

His landslide victory in the secret ballet — Shulz obtained 409 votes out of 612 — dwarfed the 51 votes Iglesias received.

SEE ALSO: How well did Spain's Podemos party do at the European Elections?