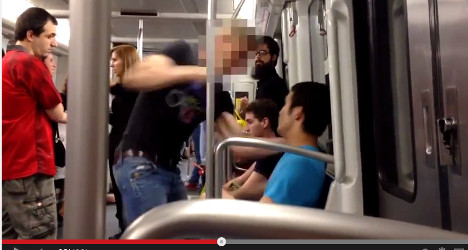 The video was reposted on YouTube on Sunday and had already racked up nearly 400,000 views as of 11am on Monday. Screen grab: YouTube

The video, shot late on Saturday night, shows a blond man standing over a young Asian man on a Barcelona metro train.

The agressor, whose face is pixellated, can be seen leaning towards his victim. He then throws several punches before shocked bystanders drag him away.

The video was first posted on a Twitter account — now taken down — containing Nazi imagery and the slogan "Always a patriot, white Europe", the Spain edition of the Huffington Post reported on Sunday.

The owner of that account tweeted he had not carried out the attack, but had merely filmed it with his mobile phone.

"The Chinese guy insulted us and the Russian (attacker) made him shut up," the Twitter user wrote.

"@6sonya said that he (the victim) said to us we weren't Chinese and was giving us filthy looks," another tweet read.

The video was reposted on YouTube on Sunday and had already racked up nearly 400,000 views as of 11am on Monday.

A politician with Catalonia's left-wing CUP party, David Fernàndez, responded by calling on people to help identify the attacker:

Barcelona Metropolitian Transport says tthe incident was not reported to security staff at the time, but provided video footage of the incident to police.

On Monday afternoon, the region's Mossos d'Esquadra police force said they had identifed and arrested the attacker, according to La Vanguardia. They plan to give a press conference at 5pm with more details.

Various left-wing groups have also posted images of the man they say is the attacker on social media sites including Twitter.