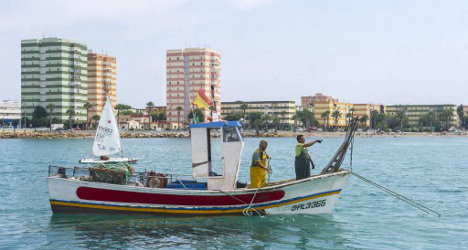 The group known as Denaes, which "promotes patriotism" and fights for the "dignity of the Spanish nation", used a fishing boat to tow the block — one of 70 — back to the southern Spanish town of San Roque.

A local judge is now deciding whether the act of removing the block weighing two tonnes was illegal, according to Spanish daily La Vanguardia.

A spokesperson for the British Embassy in Madrid told The Local they were aware of the incident on the part of a group called The Foundation for the Defence of the Spanish Nation.

"The removal of a concrete block is an individual act of vandalism. It is not a violation of British sovereignty," that spokesperson said.

The concrete blocks were at the centre of a diplomatic storm between the UK and Spain in 2013.

The waters off Gibraltar remain disputed.