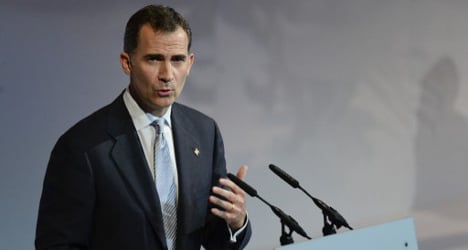 King Felipe on Thursday vowed "to make the Crown more present " in Catalonia during a visit to the region. Photo: Josep Lago/AFP

Amid high expectations on his first domestic trip since he took the throne a week ago, the 46-year-old offered a soothing message in one of the country's most politically sensitive regions.

"Sincere and generous collaboration is the best way to fulfill the legitimate aspirations of each person and achieve great collective goals for the common good and the general interest," he said in a speech in Catalan at a prize-giving for young business people.

Catalan leaders' plan for a referendum on November 9th on independence from Spain has put them at odds with the national government, which insists such a move is illegal.

Now some are looking to Felipe to help ease the row.

"All the new king can do to facilitate dialogue, especially given the intransigence of the national government, will be positive," said the Catalonia regional government's vice-president Joana Ortega on June 20th.

"But I insist we have to look for a solution where one should be found, in the political sphere."

Accompanied by his wife Queen Letizia, Felipe gave his speech in one of the region's most independence-minded towns, Girona.

As crown prince, Felipe's titles included Prince of Girona, after which Thursday's prizes are named. Now he is king, the title has passed onto his eight-year-old daughter and heir, Leonor.

But in a sign of the hostility of the pro-independence movement to the national institutions, the town hall there recently approved a motion dissociating itself from the princely title.

"If, despite this, the Royal Palace insists on, and persists in, using a title which isn't supported by the city, they know what they are doing," Girona mayor Carles Puigdemont told Catalunya Ràdio after Felipe's visit on Thursday.

"It doesn't seem like a very intelligent way of behaving," the city's top official added.

Proud of their distinct language and culture, many of Catalonia's 7.5 million citizens resent having their taxes redistributed to other parts of Spain and believe the region would be better off on its own.

Felipe made no specific reference on Thursday to the question of independence for Catalonia, but reiterated his call for "coexistence".

He said he had been making more visits to Catalonia before becoming king, "to make the Crown more present in this land, to send messages of respect, understanding and coexistence which… are inseparable from our parliamentary monarchy".

Felipe attended the same dinner after Thursday's prizes with Catalonia's president Artur Mas, leader of the current autonomy drive. The two men were photographed together but no formal meeting was scheduled between them.

Mas refrained from applauding on June 19th after Felipe's investiture speech, in which the king defended the "unity of Spain" as well as its diversity.

"Experience shows us that any hope in that sense is vain," he told AFP in an interview. "If the king wants to make a gesture he will do so and we will all be aware of it."

Mas has said he will "wait and see" how things go with the new king. He maintains his call for an independence referendum, which the government has branded illegal.

Analysts have hailed Felipe as a breath of fresh air after recent scandals for the Spanish monarchy, but caution that in Spain's parliamentary democracy the king's political powers are limited.

"The king does not govern, he reigns," said political scientist Joan Botella.

"He can contribute to changing people's state of mind. That is probably what a large part of the Catalan and Spanish public is hoping. We will see if he manages to do it."