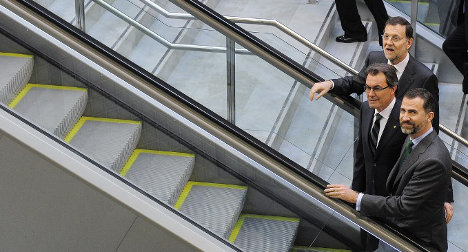 Catalan leaders' plan for a referendum on independence from Spain has put them at odds with the national government, which insists such a move is illegal.

Now some are looking to Felipe to help ease the row.

"All the new king can do to facilitate dialogue, especially given the intransigence of the national government, will be positive," said the Catalonia regional government's vice-president Joana Ortega.

"But I insist we have to look for a solution where one should be found, in the political sphere."

The king, who speaks good Catalan, heads along with his glamorous ex-newsreader wife Queen Letizia to one of the region's most independence-minded towns, Girona, to preside at a royal prize-giving.

Given the hostility of the pro-independence movement to the national institutions, it is seen as a trial of fire for Felipe, who was sworn in as successor to his father Juan Carlos on June 19.

As crown prince, Felipe's titles included Prince of Girona, after which Thursdays prizes are named. Now he is king, the title has passed onto his eight-year-old daughter and heir, Leonor.

But the town hall recently approved a motion declaring that Girona dissociated itself from the princely title.

Felipe is due to coincide at a dinner after Thursday's prizes with Catalonia's president Artur Mas, leader of the current autonomy drive, but no formal meeting is scheduled between them.

Mas did not applaud Felipe's investiture speech, in which the king defended the "unity of Spain" as well as its diversity.

Mas has said he will "wait and see" how things go with the new king. He maintains his call for an independence referendum on November 9, which the government has branded illegal.

Analysts have hailed Felipe as a breath of fresh air after recent scandals for the Spanish monarchy, but they caution that in Spain's parliamentary democracy the king's political powers are limited.

A Spanish judge ruled Wednesday that King Felipe's sister, Princess Cristina, and her husband should face fraud charges, opening the way to an unprecedented criminal trial.

"The king does not govern, he reigns," said political scientist Joan Botella.

"He can contribute to changing people's state of mind. That is probably what a large part of the Catalan and Spanish public is hoping. We will see if he manages to do it."