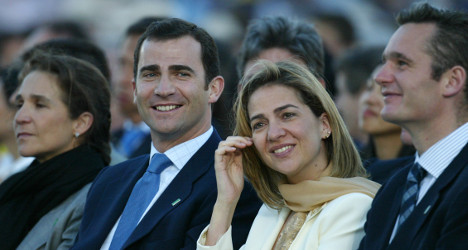 On Wednesday, Mallorca judge José Castro, wrapped up two years of investigations into the affair by recommending any charges to be laid and any suspects to be put in the dock.

But on Thursday prosecutor Pedro Horrach appealed the decision, saying there was still no "concrete" information about any crimes that may have been committed by Cristina.

This could lead to "mere speculation, if not pure fiction," said the prosecutor in his damning appeal.

The charges against Cristina arose from "simple suppositions" and there was "incriminatory" evidence, he added.

Castroi delved into allegations that Cristina's husband and a former business partner creamed off €6 million ($8 million) in public funds from contracts awarded to a charitable foundation, Noos.

Together with her husband, the princess jointly owned another company, Aizoon, which investigators suspect served as a front for laundering embezzled money.

Castro's ruling came less than a week after King Felipe, 46, took the Spanish throne promising an "honest and transparent" monarchy.

If Cristina sits in the dock, it will be the first time a direct relation of a Spanish monarch goes on trial.