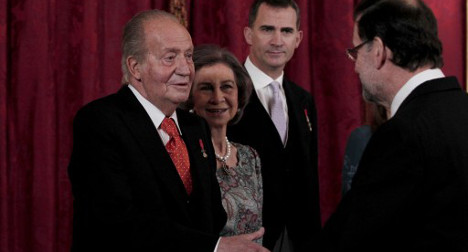 Spain's king of 39 years left himself open to possible court action, including a paternity suit brought by a man claiming to be his son, when he abdicated last week to make way for his heir, King Felipe VI.

Lawmakers of the conservative ruling Popular Party (PP) on Tuesday approved fresh legal privileges for Juan Carlos, which could be voted through by parliament within weeks despite resistance from the opposition.

The new measures were slipped into a pending judicial reform on Tuesday and are likely to be voted through easily by both sides of the PP-dominated parliament.

PP's parliamentary spokesman Jose Miguel Castillo insisted the reforms, designed to ensure Juan Carlos will be covered by the new privilege as soon as possible, were "appropriate".

Opposition groups have voted against the measures, while the main Socialist Party argue the law should be debated in a full parliamentary session.

Under the new measures, only the highest court in the land, the Supreme Court, will be qualified to hear cases against Juan Carlos.

They also extend the privilege to Spain's new queen, Felipe's wife Letizia, and his eight-year-old daughter and heir Leonor, Princess of Asturias.

"The message this gives is: 'I am not citizen Juan Carlos… I am the most high king and the royal family only answers to the Supreme Court and God," said Gaspar Llamazares, leader of one of the opposition groupings, Plural Left.

Juan Carlos's former constitutional immunity thwarted two legal suits in October 2012 by plaintiffs claiming to be his children, including Alberto Sola Jimenez, who was born in 1956.

It remains unclear whether the Supreme Court would hear a paternity suit such as Sola's or what other kinds of legal action the king might face.

Juan Carlos's youngest daughter Cristina is also facing fraud allegations. A judge was due on Wednesday to issue a judgement on whether she should be sent to trial.

A lower court is due to hear Sola's latest appeal on September 9.

The next full session of parliament that could vote through Juan Carlos's new legal privilege is due in mid-July.