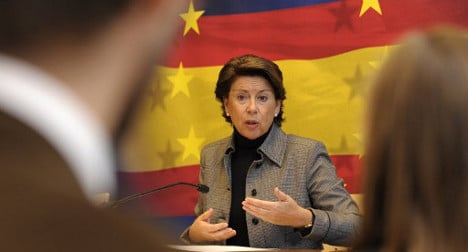 "I have absolutely no doubt that my innocence will be clarified at some level in our judicial system," Alvarez said. Photo: Jean Cristophe Verhaegen/AFP

Alvarez, a former public works minister, was last year named as a suspect during a judicial probe into the fraudulent use of public funds to pay bogus severance pay in the southern Spanish region of Andalusia.

"The judge clearly says I had nothing to do with the abuse of public money," Alvarez told the private Cadena Ser radio station.

"I have absolutely no doubt that my innocence will be clarified at some level in our judicial system," she said.

Alvarez said she was not resigning because she is a suspect in the corruption scandal but rather because Prime Minister Mariano Rajoy's government preferred to put someone else in her post.

"I sincerely hope that the ongoing investigation proceedings will lead to a positive outcome for her," he said in a statement.

The scandal — reportedly the biggest public money scam in Spain's history — involved a regional development fund that was allegedly used to pay bogus severance payments to dozens of people even though they had never worked for the firms in question.

The alleged beneficiaries of the payments were people or companies with close ties to the Socialist Party, which has ruled Andalusia for three decades, or left-wing trade unions.

More than 140 million ($191 million) were either misused or embezzled from the fund between 2001 and 2010, according to Spanish media reports.