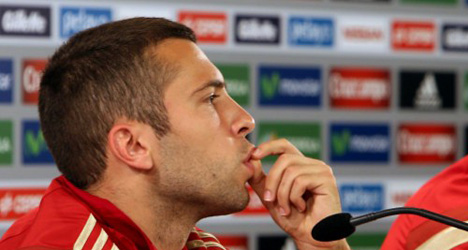 Alba and his Spain teammates were later shocked by lightning striking their team plane as it landed in Madrid. Photo: ORLANDO KISSNER / AFP

Spain and Barcelona full-back Alba, 25, was leaving  the Arena da Baixada in Brazil after the consolation victory which concluded his national team's short and catastrophic World Cup campaign.

While trudging through the mixed zone where journalists interview players, he spotted Javier Gómez Matallanas, from Spanish national sports daily AS.

"Next time I'll rip your head off," said Alba to the astonished writer, who expressed his surprise.

Matallanas told Spain's Onda Cero radio station that he was baffled by the player's behaviour, saying:  "I have no idea why. I have not written anything about him at all."

Some journalists speculated that Alba may have confused Matallanas with Cadena Ser reporter Antonio Romero who had earlier posted the following on Twitter:

"Jordi Alba, still blowing his own trumpet after a woeful season. Capdevilla [another Spanish full-back] had a great World Cup in 2010 and it didn't go to his head as much."

It was later reported that a second confrontation between the two took place as the team boarded their return flight to Spain.

Alba, who was with club and country teammate Sergio Busquets, allegedly accused Matallanas of being 'a grass'.

The plane in which Alba and the demoralized Spain squad were travelling was then struck by lightning as it came into land at Madrid, making a sound which 'sounded like an explosion' but inflicting no damage.

Players avoided angry fans and waiting media at the airport and left by a back door.