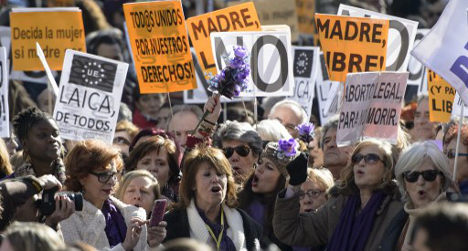 Numerous demos have been held across Spain by both pro-lifers and pro-choicers Photo: Dani Pozo/AFP

Six months ago, Spain’s ruling Popular Party sent shockwaves through Spanish society when it announced it would ban women from opting freely for abortions.

The draft reform, approved in January, allows abortions only in cases of rape reported to the police or when there is a medically-certified threat to the mother's physical or psychological health.

The controversial move has caused divisions within the party and angered thousands of pro-choicers who have taken to the streets to voice their discontent.

"We are not going to withdraw the law," Spanish Prime Minister Mariano Rajoy vowed in May in an interview on radio station Cadena Ser.

"This is a difficult subject. We have presented a draft bill and are prepared to talk and debate it with anyone who wants to."

Probably as a result of all the opposition it has faced, Spain’s conservative government has decided to mildly soften the law by allowing women whose foetuses are malformed to have an abortion, regardless of whether giving birth poses a risk to the mother’s life.

According to Spanish national daily El País, the bill is still more restrictive than the laws in place between 1985 and 2010 as the process to have an abortion is longer and more complicated for a pregnant woman.

Spain’s government is likely to approve the bill in Parliament in July so that it can come into force at the end of the year.

It was Spain’s former Socialist PSOE government which passed the current law in 2010, bringing Spain into line with much of Europe.